Wally O’Hearn – one of the truly good guys 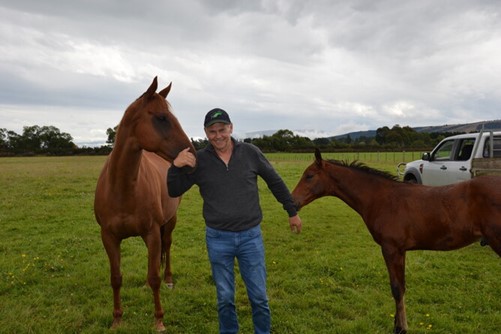 Racing bid farewell to one of its true-blue good guys when Wally O'Hearn lost his brave fight with cancer early Saturday morning.

Hours later, jockeys riding in the second race at Riccarton wore black armbands as a mark of respect on what was one of Wally's favourite racedays. The name W R O'Hearn appeared in the racebook as a part-owner of Letsbringiton, who rallied for fifth but like Race 9 runner Where's Wally, wasn't quite able to carry the day.

Wally O'Hearn learnt during more than four decades in racing that fairy tales only rarely came true, but no matter what, there was never any shortage of fun to be had during his life as a journalist, owner, breeder and all-round enthusiast.

He grew up in the north Waikato village of Taupiri and influenced by his father Stan and others of like mind, he developed an interest in racing. As a pupil at Ngaruawahia High he would sometimes skip classes in favour of a day at the Te Rapa races, making the most of a fallback that one of his teachers was also partial to raceday attendance.

Wally's occasional waywardness didn't impact his education as he developed a way with words which led to the idea of matching his attraction to racing with a career in journalism. There was a catch though - how to find that break.

"We knew Wally wanted to be a racing journalist, but I wasn't sure if that would work because he was so shy," recalls his mother Val. "Even at home the phone would be ringing but he couldn't bring himself to answer it."

Like any mother wanting the best for her offspring, Val pursued a line of inquiry through an acquaintance, Shirley Cook, who worked in the advertising department of the Waikato Times. Her Hamilton office was adjacent to the racing scribes employed on Sunday News and Best Bets, publications under the same INL umbrella as the Waikato Times.

"I asked Shirley if she could put in a word for Wally with the racing guys and the next thing he got a call to come in for an interview," added Val. "He had already left school and had a job at Horotiu (freezing works), but that only lasted a week or two. He was off like a shot to the interview and he was so excited when he got the job of his dreams."

Thus at age 16, Wally became a member of the racing media as a statistician and form compiler with the Sunday News/Best Bets team headed by Lex Nichols.

"He was shy alright," recalls Nichols, these days living in semi-retirement on the Gold Coast. "That was obvious when Ian Brown brought him up to Auckland for the interview, but it wasn't an issue.

"What struck me about Wally was his racing knowledge - even then it was clear to see that he knew his subject and was keen. He was a good choice, he was very obliging and reliable and he quickly fitted in as a popular member of the team."

Those qualities stood to the budding scribe as he progressed through the ranks, graduating to daily newspaper journalism at the New Zealand Herald, then as a lead writer with racing weekly Friday Flash and ultimately building his own stable as a freelance journalist.  His brief was immense and included coverage of race meetings throughout Australia and as far afield as Hong Kong, Dubai and Europe.

Alongside his relationship with his colleagues, Wally also developed a rapport with racing's wide range of participants that was to stand to him throughout his long and productive career. Two who became life-long friends were Racing Hall of Famers Brian Anderton and Noel Harris who turned to him for their respective life stories BJ - The White Robe Legacy, and Harry - The Ride of My Life.

"Wally was the perfect choice when the idea of doing a book came along," says Harris. "I wouldn't have got anyone else to write it.

"He knew me so well and how to put my career into words. The way it worked out, racing being one big family and everyone having their own personality, Wally fitted in perfectly."

The White Robe project began as a record of the Anderton family's heritage through the eyes of the man who took over the patriarch's mantle from his father Hector. However, with Wally at the helm the seed of an idea became something much bigger.

"Wally was in partnerships racing horses from our stable and he loved coming down here," recalls Brian Anderton. "Not long after he sat down with the family to discuss putting together some sort of memorabilia account, he thought about it and said 'I can make a book of this'.

"So he went to work and what he came up with was beyond our expectations, it was marvellous, something we'll have forever."

Wally was diagnosed with cancer in May 2016, when his initial prognosis gave him three to six months. But he would have none of that, continuing to write as industriously as ever between - and sometimes during - rounds of chemotherapy and radiation.

One of the horses Wally was a partner in at the time was the Anderton home-bred Coulee, whose 10 wins proved a timely fillip, most of all the Gr. 3 White Robe Lodge Handicap at Wingatui in early 2017.

He also fitted in trips with his wife Vanessa to various points on the globe, some of them connected to racing, others bucket-list destinations. Family beach holidays with sons David and Karl and his grandchildren were all part of capitalising on the time he had been allowed.

We all watched Wally endure his illness with an attitude that said so much for positive thinking and making the best of what life dished up.

Over the past few weeks we realised his struggle was becoming dire, and early last week I got a call telling me his days were numbered and he needed some help to organise his funeral. Tough stuff being drawn into that as a mate, but nowhere near as tough as it was for the good bugger whose time was nigh.

"I just need to know that Vanessa and the boys won't have to worry about all the arranging, it's my job to do as much of that as I can," he said. "So tell everyone I'm okay, I've had a good life and I've got no complaints.

"When my specialist told me I only had months to live I decided to set goals, and as time went on I ticked them off. Four years and six months later I can say that was my Lotto win. I was able to fit in so much more and keep enjoying life with so many good people."

"Over the years I've realised that when you die, people will say you're a good guy. Let's not forget that when all three of those blokes were alive, they were good guys then too."