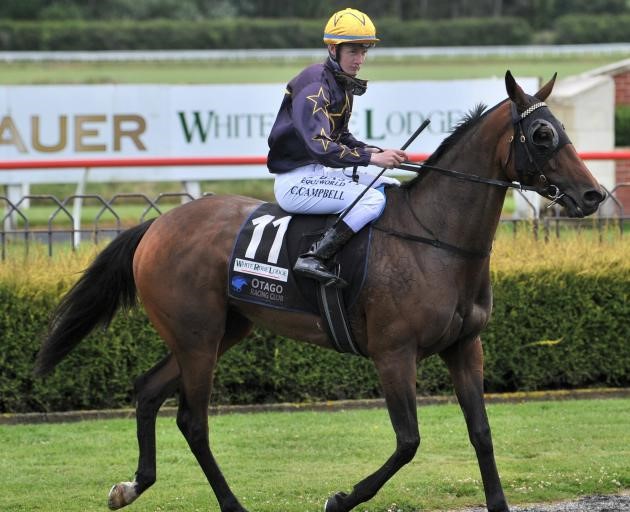 And in the process he helped White Robe Lodge rider Corey Campbell notch 100 career wins as a rider.

Gary shrugged off a tough trip to score when sitting three-wide for the entire journey of race 1.

The win shocked punters at $30 odds, but it did not come as a surprise Kennedy.

"He has been working pretty well, so it wasn't a surprise to us," the trainer said.

"And it was a pretty good effort to sit three wide in the open like he did, it was a great run."

Gary is another in a long line of winners for the combination of prominent South Island owner Eric Parr and White Robe Lodge.

Gary has taken a little while to find his feet after being educated in Canterbury by Danny Frye.

But now he looks destined for good things and to reward Parr's patience.

Gary held out Sadler's Lass (Gallant Guru-Blessed Thee-Star Way) by half a head in a Gallant Guru quinella for the Kennedy stable.

Countess Ruby (Raise The Flag-Sustain-Danzighill) went on a searching run around the field from the 800m mark and kept coming in the straight to produce a gritty win.

Countess Ruby was bred by Brian and Lorraine Anderton from their Danzighill mare, Sustain.

She is a daughter of the Anderton's 10-race winning Noble Bijou mare, Ebony Bijou.

Campbell made it two in a row and notched his 100th career win in the saddle when riding Asathought to win race 4.

Kennedy rounded out his winning treble with White Robe Lodge sired horses when Ray's In Command (Raise The Flag-Kay's Command-Towkay) took out race 7 over 1400m.

The five-year-old thrives at Wingatui and it showed when he ran to his fourth win on the track in his thirteenth start.

"He loves Wingatui, but he hates Invercargill, he has never gone any good there," Kennedy said.

"I will probably back up him and the other two horses that won up at the Waikouaiti meeting at Wingatui next month."

Ray's In Command was followed home by the Brian and Shane Anderton trained Zabay, who ran a nice third placing.

The seven-year-old heads to Riverton on Friday where she looks a big winning chance.