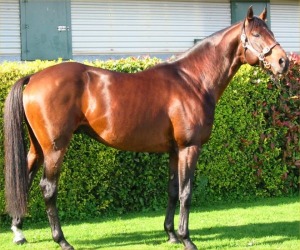 The Brian and Shane Anderton trained five-year-old put on a brilliant display when clearing out to win by a massive 11 and a half lengths for rider Corey Campbell.

“She won at the same meeting last year, in the same conditions,” Brian Anderton said.

“She likes the cut out of the ground and when she gets onto heavy tracks her record is very good.”

“She was unlucky in her last start at Wingatui but Corey took luck out of it today.”

“The way she got to the line was very impressive.”

It is no wonder Eavesdrop performed so well when stepping up to 2200m on Sunday.

She is from a great staying family, with her dam Rugby Street (Yamanin Vital) a half-sister to the dam of Who Shot Thebarman (Yamanin Vital-Ears Carol-Carolingian).

“Eavesdrop goes back to my foundation mare, Lochlisten.”

Eavesdrop is yet another winner bred on the Ghibellines-Yamanin Vital cross.

“Ghibellines has really clicked with Yaminan Vital mares and he has left a lot of nice horses.”

The three-year-old impressed when striding out for a big debut victory over 1400m.

“He is going to be a nice horse, we have kept him in because it is winter and looked after him.”

“With a bit more time he should have a good future.”

“He is one that we are thinking of lining up at the National meeting.”

Bauble is from La Gem, a descendant of Gem Flight (Mellay), the dam of four-time Group One winner Alibhai (Noble Bijou-La Gem-Mellay).

“It has been a great family, we bred Alibhai and sold him to Tommy Smith and he did a great job in Sydney.”

Bauble was bred and is raced by Brian and Lorraine Anderton.

The White Robe Lodge proprietors also bred Eavesdrop and race her with long-time supporters The Diamond Syndicate and the Woolshed Wednesday Syndicate.