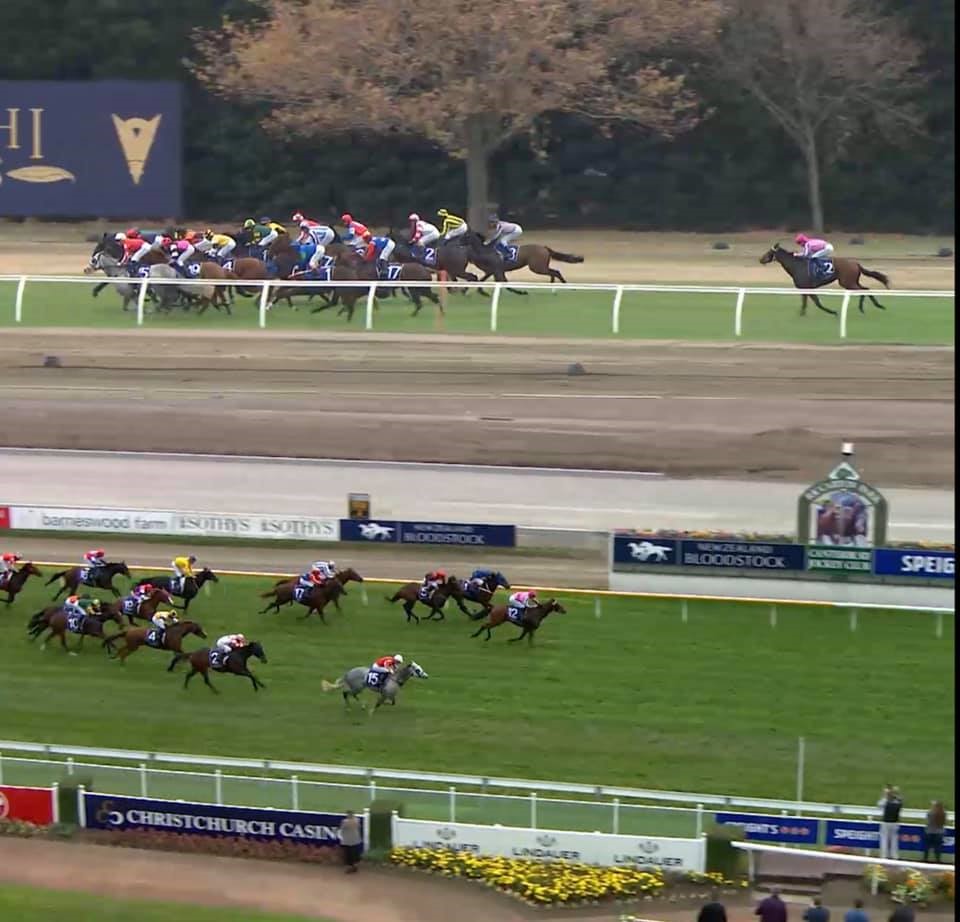 The White Robe Lodge bred and trained Exchange showed his class when producing a win that had to be seen to be believed at Riccarton on Saturday.

The progressive four-year-old did himself and rider Jacob Lowry no favours when missing the kick in his 1600m assignment and then tailing the field by six lengths shortly after the start.

The mishap would prove to be little more than a minor inconvenience for Exchange (Ghibellines-Swapping-Encosta De Lago) as he produced a stunning recovery to win.

Owner Ray Kean, who races the galloper with wife Alison and Ian and Sue Nicol admitted he had all but given up hope when his horse was left a long and lonely last shortly after the start.

“When he jumped like that I though gee this isn’t looking too good,” Kean said.

“And I think Jake was thinking the same.”

“But Jake did well, he tacked him onto the back of the field and he was better off there than four and five wide.”

“He tucked him in and weaved his way through, it was a great ride.”

Exchange was in the spelling paddock only a matter of hours after his standout win.

After taking his record to nine starts for three wins and three placings, the four-year-old looks ready to make a big impact when he returns in the spring.

“We have turned him out now,” Kean said.

“He has been in for a while, he has had five starts this prep and he has gone good in all of them.”

“He was in the paddock at Ian’s on Monday morning.”

“Ian does a hell of a job, he breaks them in and pre-trains them.”

“Brian and Shane will sort out what is next for him, but hopefully he will be going towards some nice races later on in the year.”

“He is a nice horse, but you have got to keep your feet on the ground.”

“You don’t want to crow too early, but he has certainly shown a bit.”

The Keans and the Nicol’s strong association with White Robe Lodge, as well as Exchange’s strong pedigree made the horse an attractive buy.

“We bought him at the South Island Sales,” Kean said.

“We have been great supporters of White Robe and it was a good family – Swapping’s family is a great family.”

Another of Ghibellines’ sons also produced a strong run on Saturday.

Ghibellines has been in brilliant form recently and his stakes winning son El Gladiador (Ghibellines-Querella-Haafiz) has contributed to that.

The John and Karen Parsons trained galloper took his career earnings past $80,000 when winning over 1800m at Riccarton last weekend.