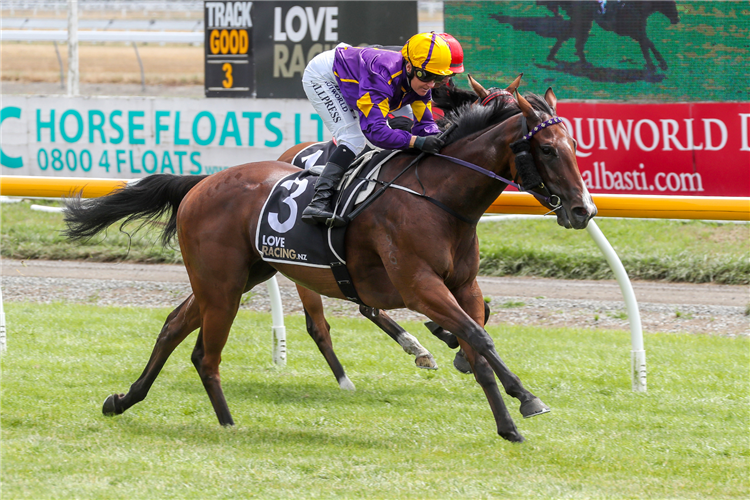 The stallion notched a winning treble at Wingatui on Saturday before his very promising son Markus Aurelius completed an outstanding two days with his victory on New Zealand Derby Day at Ellerslie on Sunday.

Ghibellines’ quartet of wins all came with stock born at White Robe Lodge and bred or bred in partnership by Brian and Lorraine Anderton.

The Brian and Lorraine Anderton bred star of the South Island’s sprinting ranks cruised to the line barely asked for an effort by rider Chris Johnson.

Ghibellines’ hot run of form over the weekend started when the Brian and Shane Anderton trained Country Boy (Ghibellines-Goldie Girl-Generous) beat a maiden field packed full of form over 1600m.

White Robe Lodge rider Corey Campbell sat the four-year-old just off the speed before he powered home to win.

The victory continued a long and successful association between Brian and Lorraine Anderton and the Brown Family.

Country Boy is raced by the Andertons with the Brown Family syndicate, headed by Dennis Brown.

The Brown family have been loyal White Robe Lodge clients for many decades raced generations of outstanding racehorses by resident sires.

Country Boy races in the colours of the late Joe Brown, which Reformed carried to run third in the 1952 Melbourne Cup.

Country Boy comes from an incredible line of stakes winners bred by the Brown family.

Five generations on his dam side, starting with granddam Joe’s Girl have all won at black-type level.

Exchange (Ghibellines-Swapping-Encosta De Lago) continued his stallions hot form and scored back to back wins when scoring over 1600m at Wingatui on Saturday.

The four-year-old showed a touch of class when White Robe Lodge rider Jacob Lowry weaved him through the field to score after he was left at the back of the field from a wide draw.

The four-year-old’s win not only showed he has a promising future, it sealed a winning treble for Ghibellines at Wingatui.

Lowry also took out Saturday’s feature race for three-year-old fillies, aboard The Gift.

Markus Aurelius (Ghibellines-Evancho-Shinzig) made it win five in just his tenth start when clearing out to win by three lengths.

The win continued a fairy tale ride for the Te Akau Great Southern Man syndicate, which include White Robe Lodge’s Jack Stewart and many of his friends.

Before the Wingatui meeting Ghibellines left yet another winner in Float (Ghibellines- Deinira-Savabeel).

The four-year-old cleared out to win by a length in her first attempt over 1600m for trainers John and Karen Parsons.

Ghibellines is not the only White Robe Lodge sire that has been in good form recently.

On the same day the sire produced Southern Vouge (Raise The Flag-The Bindi Girl-Seasoned Star) to win her maiden over 1600m.

Raise The Colours (Raise The Flag-Rosegreen-Giant’s Causeway) has started her career in outstanding fashion in Victoria with a win over 1600m at Bendigo and a second placing in just two starts.