Heberite another Raise The Flag star 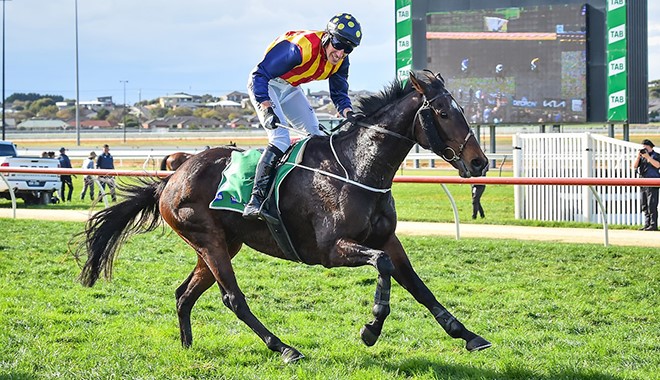 Heberite scored another big win in a Victorian staying feature for White Robe Lodge’s resident sire Raise The Flag with his epic staying performance in the Grand Annual Steeplechase at Warnambool earlier this month.

The incredible staying genetics of White Robe Lodge shone through in the rich A$350,000 feature when Heberite (Raise The Flag-Arurtie-Rua Rukana) produced an epic staying performance for trainers Cairon Maher and David Eustace and rider William McCartney.

The victory was the second in recent seasons in one of the biggest staying events on the Victorian racing calendar for Raise The Flag, after the Maher-Eustace stable produced Ablaze (Raise The Flag-Alight-Personal Escort) to win the Grand Annual Steeplechase in 2020.

White Robe lodge clients Ian and Sue Nichol and Ray and Alison Kean share in the ownership of Heberite, who they won four races with when he was trained at White Robe Lodge by Brian and Shane Anderton.

They retained shares in the seven-year-old after he was sold to many of the same owners that purchased Ablaze out of the Anderton stable.

Both horses made their way into the Maher-Eustace barn in deals set up by White Robe Lodge’s studmaster Wayne Stewart.

The result of those sales have seen Heberite and Ablaze win three Grand Annual Steeplechases which have been run for a combined prize pool of more than A$1,000,000.

“It is great with Ablaze and now Heberite,” Brian Anderton said.

“Both are Raise The Flags, so it was really good.

“Raise The Flag is a great sire of stayers, they stay all day, we are thrilled.”

“With the numbers he has had in Australia, Raise The Flag has won an incredible amount of money in some very good staying races.”
“The staying opportunities are there for these horses and they can show how good they are.”

“I bred Ablaze with Mickel Weastall and Ian and Ray have kept a 10 percent share each in Heberite with their wives.”

“My son-in-law Wayne Stewart has got to get some credit too to put the deals together.”

“He arranged the sale of both Heberite and Ablaze.”

The seven-year-old has had just three jumping starts and just two have been over steeples.

It looks like an understatement to say the future looks very bright for Heberite.

Jockey William McCarthy was full of praise for the horse after his Grand Annual Steeplechase win.

"His second time over steeples and to come out here and win a Grand Annual and jump like that, it was an unbelievable performance," McCarthy said.

"He didn't corner very well at the bottom of the hill the second time around, he was still thinking about going left, that was just inexperience for his part because we'd gone left the first time around.

"After we straightened up, we had a bit of company over the last four or five (fences) and he showed some great heart for a young horse.

"To jump as well as he did and fight down the lane as well. I wasn't much use up on top of him with my limit weight of 64kg, so he had to take me all the way."

Raise The Flag will stand for a service fee of $6000+gst in the upcoming breeding season, representing incredible value for anyone looking to breed a quality middle distance or staying horse.