Smokin’ Romans a star on the rise 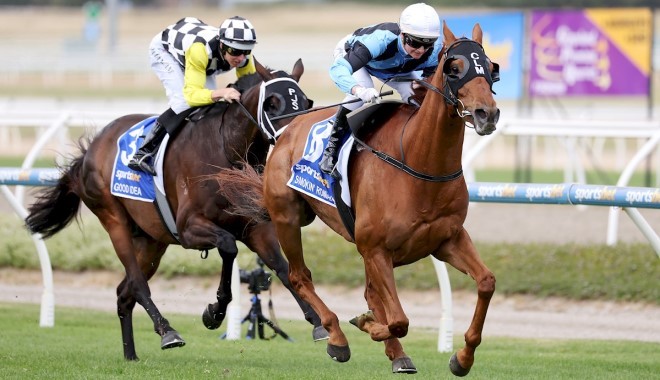 The star of White Robe Lodge born and bred stayer Smokin’ Romans continued its impressive rise when he cleared out to win the Listed Pakenham Cup on Saturday.
In the process, the exciting galloper continued the brilliant recent form of his sire Ghibellines who just a matter of days earlier produced his biggest ever result with Markuis Aureilus’ win in the Group 2 Couplands Bakeries Mile.

Sold at Karaka in 2018 by Brian and Lorraine Anderton, the Cairon Maher and David Eustace trained Smokin’ Romans (Ghibellines-Inferno-Yamanin Vital) had created a big impression in just 17 starts before his breakout victory.

The five-year-old took his game to a new level with a powerful win in the Listed Pakenham Cup leaving his co-trainer Eustace full of praise for him.

"He is an absolute legend."

"He’s been in work over a year and he just keeps turning up.”

"He loves his racing and he’s just getting better and better.”

“He’s a funny horse, he’s always had his quirks but he was really, really good today.”

"He got a lovely ride and he’s a favourite in the stable."

Smokin’ Romans was eased down to win by two lengths by rider Jamie Kah.

Kah was also full of praise for the exciting stayer.

"This horse - it just gives Ciaran and Dave so much credit - he’s been up so long and I’ve never seen him look so good," Kah said.

"He was amazing out there today and made my job easy and I got the spoils for it.”

"I knew I had a fit horse underneath and knew if I wanted to go I could but I wanted to give him the easiest run I could early.”

"He does it all himself, he could feel them coming and he just quickens up when they get to him.”

"He’s push button, a really lovely stayer. He’s push button and with the blinkers on he was really keen on the turn and I had to let him go, he’s come through his grades perfectly and well done to the team and the owners."

The White Robe Lodge born and bred filly powered to a smart victory over 1200m at Ascot Park for co-owner, Murray Ford who purchased her as a weanling.