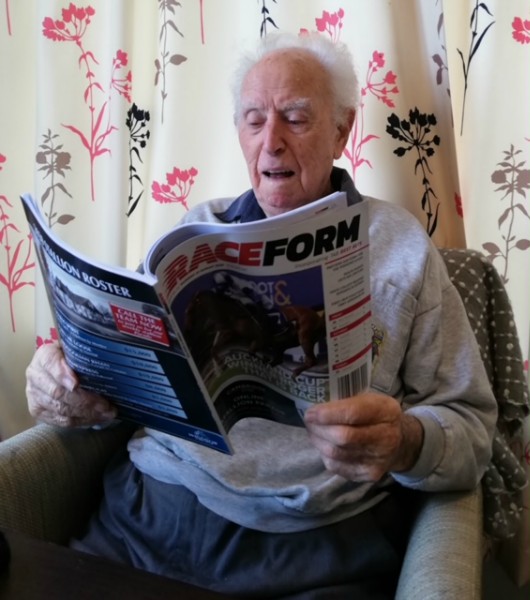 Any New Zealand racing fan with a memory going back half a century will prick their ears at the mention of the names Frank Conway and Mayo Gold.

He a hard-working Irish immigrant and she a champion two and three-year-old in the late 1960s, together they rose from humble beginnings to share an incredible legacy.

Those and other memories came flooding back through a phone call last week regarding delivery of RaceForm to a North Canterbury retirement village. Long story short, Frank Conway's daughter Kathy Chubb was inquiring as to the timing of the weekly edition which she had subscribed to for her father with the intention of keeping him in touch with racing.

Until recently Conway had lived in Auckland, having arrived there in 1953 after spending his first two years Down Under in Australia. He and two compatriots set up a painting business and through hard work flourished to the point that in 1967 Conway decided to indulge his long-held desire to race a horse.

Who better to tell the story but the man himself, at age 94 still sharp as a tack, with three racehorses and another three broodmares in the care of the Anderton family of White Robe Lodge. The nonagenarian loves nothing more than talking about them and his stars of the past, so through his daughter Kathy I was able to connect and together we took a trip down memory lane.

"I grew up in County Galway, in a village near Tuam, and my earliest memory of horses was driving a four-wheel buggy," Conway reminisced.  "Frank McGeevers and Mick Finnegan were mates from the old country and we ended up in London after the war before deciding to head to Australia.

"We spent two years there as painters and then thought we'd try our luck in New Zealand. We came across to Auckland in a flying boat that landed in Mechanics Bay.

"There was an advertisement looking for people to paint 500 pre-cut houses that (Prime Minister) Sid Holland had imported from England. They stored them in Panmure and after they were put together we painted them.

"It was hard work but it got us going. The three of us formed a painting and decorating company called CFM Painters and then we set up a construction company called Kilmaine Builders. By the time I retired I had 51 flats out for rent."

Conway had always been interested in thoroughbred bloodlines, especially those with a connection to Ireland, and having decided to take the plunge in the autumn of 1967, he drove to Hamilton for the inaugural Wright Stephenson's Claudelands Yearling Sale.

His chosen lot was a medium sized chestnut filly from Jim and Veda Morris's Rodmor Stud, by resident stallion Gold Sovereign from Gold Sim. The pedigree contained two names that struck a chord with the Irishman, Gold Sovereign's grandsire Nasrullah and fellow breed-shaper Hyperion, the paternal grandsire of Gold Sim.

"She had the right blood in her veins and I paid 500 guineas for her. I rang (Takanini trainer) Ray Wallace to say she was on the way to his place, but after she arrived I got a phone call to say he didn't think a lot of her, that she might be better off with a young trainer by the name of Trevor McKee."

History dictated otherwise and within 12 months Conway and Wallace were the proud owner and trainer of the country's champion juvenile. In a demanding campaign stretching from spring to autumn, Mayo Gold won eight of her 17 starts, followed by an equally busy and lucrative three-year-old season when she won another eight from 16.

Determined, tough and classy, she captured the imagination of the racing public and the admiration of all involved with her.

"She went down on the Friday and ran on all three days of Cup week at Trentham," recalls Conway of Mayo Gold's three-year-old season. "On the first day she won the Wellington Stakes (six furlongs for two and three-year-olds) giving 17 and a half pounds (eight kilograms) to the champion two-year-old colt Daryl's Joy. Then she won the open sprint on the middle day carrying topweight of nine stone two (58kg) and on the last day she won the New Zealand Oaks (10 furlongs) with a slipped saddle."

Mayo Gold maintained that form into late summer by downing weight-for-age star Game in the Jackson Stakes over a mile at Wanganui and completed a six-win sequence in the Lady Norrie Stakes over the same distance at Te Rapa. At the end of the season she was the country's third highest stake-earner with $23,125, behind her stablemate, Wellington Cup winner City Court, and Auckland Cup winner Il Tempo.

With the additional contribution of their second racehorse, the five-win juvenile Corrundulla, Frank and his wife Kathleen Conway finished second to leviathan Southlander Bill Hazlett on the New Zealand owners' premiership for 1968-69 with total stakes of $30,685.

A further mark of Mayo Gold's durability was her track record win at four years in Ellerslie's premier sprint, the Railway Handicap, followed just a day later by a photo-finish third in the George Adams Mile. The mighty machine retired as the winner of 18 races to become a successful broodmare with eight winners from 10 foals.

Beginner's luck is not foreign to racing and while no other carrying the Conway colours would hold a candle to Mayo Gold, there have been plenty more wins in subsequent years - the total is somewhere near 130 in fact - and still counting!

"BJ and I go back a long way and it's wonderful to be able to rely on him and his family," he says.  "He and I talk on the phone every Tuesday, I really enjoy that."

The attraction of breeding his broodmares to White Robe Lodge's Sadler's Wells stallion Raise The Flag was all the enticement Conway needed several years ago, and in 2017 he was rewarded with victory in the Listed Gore Guineas by the Brian and Shane Anderton-trained Raise You Ten (Raise The Flag-Molly Malone). Raise You Ten and his brother Raise You Five, who have the blood of Mayo Gold in their pedigrees through their granddam She's Chic, a daughter of Chief Mayo, have between them won six races.

Conway moved to the South Island himself several weeks ago, to be closer to his North Canterbury-based daughter Kathy and her family following the death in February of his wife Kathleen, and is now a resident of the Charles Upham Retirement Village in Rangiora.

"When Mum passed away we carried out her wish for her ashes to be scattered on Avondale racecourse," Kathy explained. "For years the family home had been in Crayford Street overlooking the track. I contacted the club to see if it was possible and they were marvellous, so we did that and named two races at the Avondale meeting in March after her and Mayo Gold."

It was also on Kathy's initiative that her father became a subscriber to Raceform, adding a vital element that keeps him up with what's happening in the world of racing that he still wants to be connected to.

"I think it's an excellent publication, some lovely stories each week and all the fields for the weekend," says Conway. "After all we get nothing like what we used to in the newspapers, so you've got to have something and this is perfect.

"Back in the day I enjoyed having a bet, most of the time on my own horses and on other races as well. I remember a Cox Plate when I spent $102 boxing several horses and getting a trifecta worth $8,000.

"These days if I want to have a bet I get a mate to put it on for me. The main thing with RaceForm I can keep track of things, that's how I still know what's going on. Even at my age that's important."