Boy So Gallant in Timaru Cup 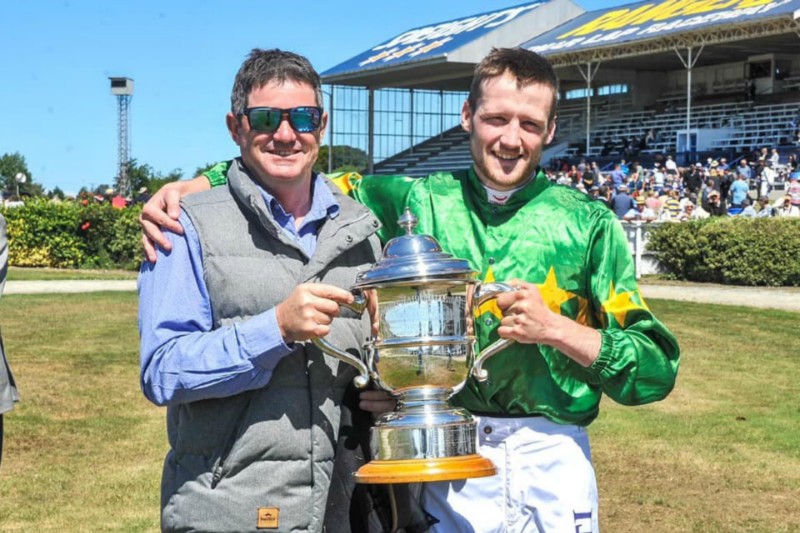 Gallant Boy showed his pure class with the toughest of wins carrying the top weight of 60kgs in the Listed Timaru Cup on Monday.

The Brian and Shane Anderton trained galloper continued a brilliantly consistent 10-year-old season when taking out the 1600m feature courtesy of a pinpoint ride by Jacob Lowry.

Gallant Boy (Gallant Guru-Mega Babe-Personal Escort) carried at least 6.5kgs more than all of his 13 rivals except one - last year's Timaru Cup winner and this year's eighth placegetter Who Dares Wins.

After hitting the lead early in the run home Gallant Boy dug deep to hold off the late runs of  lightly weighted placegetters Flying Sardine and Owen Patrick.

"There's just something about him, as every time he goes out there, he gives 110 percent," Shane Anderton told NZ Racing Desk.

"You couldn't fault his form and he had probably run second a couple of times when he should have won, but he's always having to give them weight which can slow the best of them down."

"It's hard to find horses like him and he's going to take a bit of replacing when we finally retire him."

Lowry took every precaution to make sure Gallant Boy did not have to expend any extra energy while giving away a weight advantage to his younger rivals by saving every inch of ground he could before presenting his charge for his winning run in the home straight.

"Jake said when they came at him, he kicked and found another length," Anderton said.

"He felt he always had a bit more up his sleeve if he needed it and that was probably because of the economical run he got throughout the race."

Already with a win and a second in the White Robe Lodge Weight-For-Age to his name, the 10-year-old will seek more success in Otago and Southland's biggest race next.

"I think we'll give him a bit of a freshen up now and then maybe look at a race like the White Robe Lodge in February," Anderton said.

Gallant Boy gave the Anderton stable and Lowry their third Timaru Cup win together after Tommy Tucker won the race for them in both 2015 and 2016.

Gallant Boy was bred by the late Patrick Smith and raced by his estate through his wife, Janis.

The Lance Robinson trained mare powered to victory in her first start since October.

The four-year-old was bred by Brian and Lorraine Anderton and sold as part of the White Robe Lodge draft at the 2018 South Island Sale for the bargain price of $8,500.

On an already outstanding day for White Robe Lodge sires, Raise The Flag got in on the winning action, too.