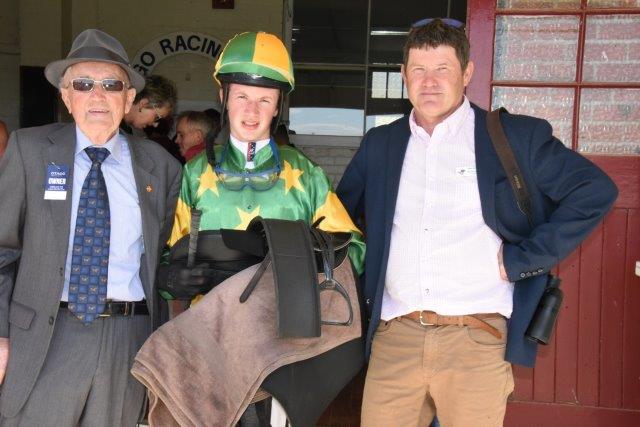 White Robe Lodge couldn’t have wrapped up another successful season in better style than the outstanding results produced at Oamaru on Sunday.

Resident sire Raise The Flag notched a winning double and a quinella.

Not to be outdone, rising star Ghibellines produced a win and one of the eye-catching runs of the day for third with just three starters.

Lastly, stable rider Jacob Lowry scored one of the most important wins of the day to wrap up an outstanding winning run for the White Robe Lodge team.

The four-year-old, bred by Brian and Lorraine Anderton and raced in partnership with The Diamond Syndicate and the Woolshed Wednesday Syndicate, ran four placings leading into her well-deserved victory on Sunday.

“She deserves it, she had been going very well,” Brian Anderton said.

“She can have a freshen up now, it was a very testing track and it is a good time to give her a break.”

“We will bring her back in the spring when there is still a bit of cut in the tracks.”

Slammer (Raise The Flag-Miss Agavero-With Class) completed the second leg of the Anderton stable’s winning double by bringing up his sixth career win by scoring over 2200m.

A true staying type, the seven-year-old relished stepping up to a middle distance for the second time this campaign.

With his staying prowess, Slammer is a jumper in the making but he has plenty of flat racing ahead of him before he goes over hurdles.

“It was a tough effort, we were very pleased with him,” Anderton said.

“There is a 2000m race on the last day of the Grand National Carnival, so he will go there next.”

“We have been schooling him and he could just about go for his ticket.”

“I think it has helped him quite a bit.”

Slammer was followed across the line by Raise Your Sights (Raise The Flag-Keepercrossed-Keeper) who filled Raise The Flag quinella.

Both Slammer and Eavesdrop were perfectly handled by Corey Campbell.

Jacob Lowry clinched a vital win on the last event on the Oamaru card with St Andre which handed trainers Michael and Matthew Pitman a one win victory over Kelvin and Aimee Tyler in the South Island trainers premiership.

The Terry Kennedy trained eight-year-old, who scored her fourth career win over 2200m, was bred by Brian and Lorraine Anderton.